We use k-d tree, shortened form of k-dimensional tree, to store data efficiently so that range query, nearest neighbor search (NN) etc. can be done efficiently.

What is k-dimensional data?

Why are we talking about efficiency?

Suppose, given a data point {43, 4650}, we want to know which person has a similar profile. In this particular example, it would be {45, 5000} whose age and salary both are close to this input. If we want the second closest person, it would be {36, 4000}. How did we find that? Well, we could iterate over the 6 data points and check against each of them. We would end up doing comparison against each of them. That is O(n) complexity. Not bad, but when we have millions of points it would be very expensive.

How do we split the points?

Where do the data points reside?

A k-d tree can have all the data points residing only in the leaf nodes. The intermediary nodes could be used to save the (non-data) splitting values. Alternatively, all nodes – internal and leaf, could save data points. In our case, we are saving data in all nodes.

The above tree looks very symmetrical. That means, both the left sub-tree of right sub-tree having almost the same number of nodes. If the height of left and right sub-tree differs at max by 1 then it is called a balanced tree.

The more a tree is balanced the more efficient it is to do search and other operations on it. For example, if we have to do a search for a number in the above tree with height = 3, it would take at max 4 (height + 1) probes. If it were a skewed tree where most or all nodes reside on the same side, it would have taken 15 probes in the worst case, similar to a linear search.

How can we build a balanced tree?

Say, at level 1 the first dimension, say x is chosen as the cutting dimension. Since we want half the points to fall on the left side and the rest half on the right side we can simply sort (typically with O(n log2(n)) complexity) he data points on x dimension and chose the middle as the root. We make sure that we remain consistent in choosing for left side points whose cutting dimension value is less than the same for root and more than or equal to for the right.

At the end the tree would look like below:

We could visualize the points and the tree it in a different way. Let us put the 2 dimensional 13 points in x-y coordinate system.

Root (3, 6) would then divide the bounding box A into bounding box C and D owned by 3rd level roots (2, 2) and (2, 10) respectively. It does so using y as the cutting dimension meaning splitting the points inside A based on y dimension values.

Bounding box C rooted at (2, 2) is further divided into E and F, this time using x as the cutting dimension.

Similarly bounding box B will be divided into smaller boxes.

The final bounding boxes are shown below. Even though bigger bounding boxes like A is not shown here, they are all present nonetheless. Only first level division of the B bounding box is shown where (7, 7) has split it into O and P.

How many neighbors do we want?

We are interested to get k nearest neighbors, where k can be 1 2, 3 or any value. However, we will first see how to get the closest one point. It can then be easily extended to understand how to get more.

How to find the closest point?

We will extend the same binary search principle here. We start at root and then traverse down the tree finding the promising bounding boxes to search first and at the same time skip bounding boxes where the chance to get a closer point than the closest one to the query point found so far are thinner.

We will maintain the closest point (to Q) and minimum distance (distance between closest point and Q) found so far, at first they are null and infinite respectively. We start at root, with cutting dimension being x and do the following:

Let us walk through this particular example. At root (5, 4), closest point so far is null, minimum distance is also null. We set the root as the closet point and minimum distance (using commonly used Euclidean distance for continuous values) to ((x1 – x2)2 + (y1 –y2)2)1/2 = 4.12 (approx.). Now we have two bounding boxes A and B. The decision that we need to make is which one to traverse first? Q’s x dimension value 4 is smaller than root’s x dimension value that is 5. So we choose left first, right second. Both of them are to be called by using the cutting dimension y. The bounding box for each of the call is going to change. Well, we know each root owns a bounding box.

At the second call, root is (3, 6), bounding box is A. Distance from Q to A is zero as Q is within A. So we cannot skip traversing this sub-tree. Distance from (3, 6) to Q (4, 8) is 2.24, closer than existing minimum distance 4.12. Hence, we update our closest point to (3, 6) and minimum distance to 2.24. Next decision to make is again which side to traverse first. We have Q’s y value 8 that is more than present root’s y value 6. So we will traverse the right side first, left side second.

Next, the function is called with root, (2, 10), cutting dimension x and bounding box D. Distance between (2, 10) and Q (4, 8) = 2.83 that is larger than existing minimum distance. So we are not updating the closest point in this call. Next – choose which side to traverse first. Q’s x dimension 4 is bigger than root’s x dimension 2, hence right sub-tree is chosen first that is null anyway. So the call to it will return without doing anything.

Next call would be made with root (1, 8) that is 3 units away from Q. No improvement for the closest point. Also this root has no children. We have reached bottom of this side of the tree in our DFS search.

Next call is done with root (2, 2), far away from Q. But the bounding box owned by it is only 2 units away from Q. Hence, there is a chance that we might end up getting a closer point from this area. Hence, we cannot skip this tree. Right side to traverse first based on x dimension value comparison.

Root (1, 3) is called that owns bounding box E that is 2.83 units away from Q, having no chance to offer any closer point. For the first time we can skip this area/sub-tree/bounding box.

Sub-tree with root (7, 7) owing bounding box O is called. Subsequently sub-tree rooted at (6, 8) would be called and that would be the closest point at distance 2.

How much search space did we prune? 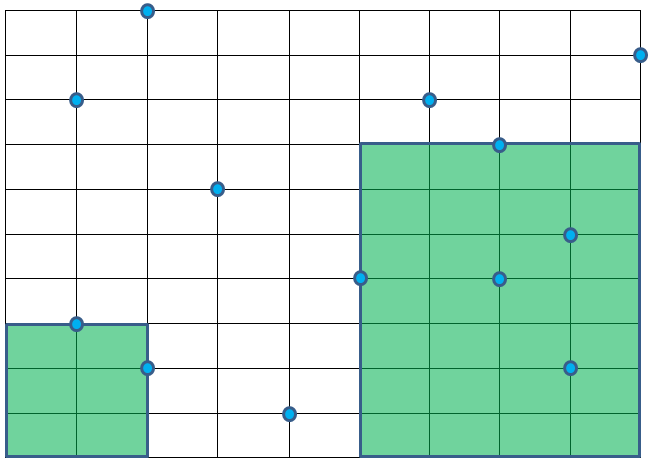 How to get k nearest neighbors?

Instead of keeping a single closest point we could maintain a priority queue (max heap) to keep k (say 2, 3 or any number) closest points. The first k points would be en-queued anyway. Onwards, a new point, if better, would replace the worst of the closest point found so far. That way we can maintain the k nearest points easily.

Too few points is a problem

If we have to construct a k-d tree with 20 dimensional data sets, we got to have around 220 data points. If we don’t have enough data then at many levels we will not have sufficient data to split. We will also end up with an unbalanced k-d tree where search and other operations would not be very efficient.

In general, we need k-d tree when we have higher dimensional data points. But when the dimension is too high other approaches might work better.

I am working as a Data Scientist at CrimsonLogic Pte Ltd, Singapore. I have a BS in Computer Science & Engineering from Khulna University and ME in Internet Science & Engineering from Indian Institute of Science (IISc). I have a few publications on Query Optimization in RDBMS in ACM SIGMOD, IEEE ICDE etc. I was a founding team member and VP Engineering of iTwin, a spinoff from A*STAR. I am working as a software engineer/data scientist for 15 years. I am interested in Algorithms, Database, and Machine Learning among others. I am a father of two children and live in Singapore. www.linkedin.com/in/dasgopal https://github.com/gopalcdas View all posts by Gopal Das