We are trying to understand how an HTTP request is processed by .NET web application, hosted in IIS in various scenarios with a focus on synchronization of the processing of that request. To be precise, we are interested in the thread and process contexts involved while serving an HTTP request.

Multiple clients across the globe, using their respective browsers, sending HTTP request to the web server.

All these http requests are ending up in IIS web server, hosting the application.

HTTPS.sys, as a forwarder, might directly pass the request to the right worker process, or as a request queuer, queues it unless a worker process picks it up. Once the response of that request reaches to it, it returns that back to client browser. Also as a kernel level cacher, it does some kernel level caching and if possible, returns the cached output directly, without involving any user level processing.

Worker process, w3wp.exe, an executable, a process to OS, runs inside IIS user mode, is little different than other processes in the operating system (OS), in the sense that it can contain multiple application domains.

When worker process receives a request, it uses worker thread to process that request. If two users send two requests to the same web application, both of them can be simultaneously executed by two worker threads and served.

This is important as it renders uses of static variables, application-wide variables etc. problematic in web application.

When one web server is not enough to serve the clients requests, we need more of them to host the same application/web site. We call it web farm.

A load balancer would sit in front of the web servers and its IP will be exposed to external world. HTTP requests will come to load balancer first and it will then distribute the load to different web servers.

In the above image, showing web garden, two requests are being served by two worker threads, belonging to two application domains (both associated with same web application), each running in a separate worker process, both of them (worker processes) contained within the same application pool. 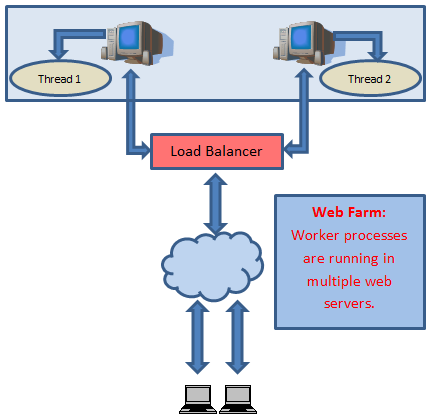 In the above image, showing web farm, two requests are being served by two worker threads, each running in a separate web server.

I am working as a Data Scientist at CrimsonLogic Pte Ltd, Singapore. I have a BS in Computer Science & Engineering from Khulna University and ME in Internet Science & Engineering from Indian Institute of Science (IISc). I have a few publications on Query Optimization in RDBMS in ACM SIGMOD, IEEE ICDE etc. I was a founding team member and VP Engineering of iTwin, a spinoff from A*STAR. I am working as a software engineer/data scientist for 19 years. I am interested in Algorithms, Database, and Machine Learning among others. I am a father of three children (two at NUSH and one is too little to go to school). I live in Singapore. www.linkedin.com/in/dasgopal https://github.com/gopalcdas View all posts by Gopal Das